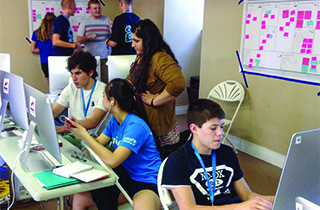 For high school students with a knack for business and a dream of operating their own company one day, there might be no better summer experience than spending three weeks at Kentucky’s Governor’s School for Entrepreneurs (GSE).

Launched in 2013 as an intensive, residential entrepreneurial training program for rising high school sophomores, juniors, and seniors, GSE is sponsored by the Kentucky Science & Technology Corporation (KSTC) and has been held to date on the campus of Georgetown College.

While similar in some ways to Kentucky’s other popular “Governor’s Schools”—the Governor’s Scholars Program for academically talented students and Governor’s School for the Arts, which has programs in music, theater, architecture, creative writing, and more—GSE is unique in its focus on fostering and developing students’ entrepreneurial talents and business know-how.

“We saw that there was a lack in the state of entrepreneurship opportunities and programs that taught entrepreneurship for students at the high school level,” says Laurie Daugherty, Governor’s School for Entrepreneurs executive director, explaining the motivation behind the development of the program.

GSE applications are not evaluated based on students’ classroom GPA or standardized test scores, but rather on the strength and innovation of the students’ new product or business idea, which they pitch via an online application and two-minute video.

“This program is ideal for those students who perhaps may not engage well in a typical classroom but who go home at night and tinker in the garage or write computer code or design things,” Daugherty says.

Students can apply to the program as individuals or part of a team. Once they arrive on campus, all participants are assembled into teams with a goal of developing a business model based on a new product of their design. Their final day of camp sees them pitching their business plans to real-life Kentucky entrepreneurs and angel investors, not altogether unlike the set-up of ABC’s popular Shark Tank TV show.

Product ideas submitted by last year’s 49 GSE participants ranged from smartphone apps—including one that helped students prepare for the ACT/SAT—to a safety strip that would indicate when car tires needed to be replaced, a project that ultimately had to be abandoned as the team “pivoted” to another idea in response to their market research.

At GSE, participants work hands-on with guest mentors who are themselves successful entrepreneurs, like “Papa” John Schnatter of Louisville. They take field trips across the state to visit innovative businesses like Lexington’s FoodChain, which raises fish and restaurant-quality greens through an indoor aquaponics system. They conduct extensive surveys—both in person and online—to understand the market for their product. And they learn about product design, pricing, revenue models, and the concept of the “triple bottom line—focusing not just on profit but also on helping people and the planet,” Daugherty says.

Brad Armstrong, an Owen Electric Cooperative member in Hebron, who attended GSE last summer as a rising senior, already owned a thriving lawn care business serving both commercial and residential clients. But attending GSE introduced him to coding—he got a mini coding crash course thanks to one of the program mentors, a representative with Apple Inc.—and he plans to focus his future entrepreneurial efforts on developing new smartphone apps.

“The whole new ‘app-sphere’ is such a booming marketplace right now. It’s really the direction that everything is headed,” says Armstrong, who will begin college this fall at the University of Cincinnati’s Carl H. Lindner Honors-PLUS business program.

“I was an A+ student who had never failed at anything,” she says. “But during GSE we would run into these roadblocks as we were planning our businesses. Groups would find out that their ideas were already patented, and we had to repeatedly revise and change our business models. It taught me that you’re going to fail in life, and you just have to get back up and keep trying,” Ali says.

In fact, that message of continual business model revising and refinement—or “pivoting,” to use the business term that GSE adopts and encourages the young entrepreneurs to implement—is perhaps the key takeaway of the program.

When her team faced their first “pivot,” they were surprised to be greeted back at the dormitories by an impromptu “failure party” complete with cake, ice cream, and confetti, says Fayette County teacher Casey Bayne, a GSE team leader.

“We cheered that first team to get to a ‘failure’ point, because they had reached a huge accomplishment. They were the first team that was going to move their product in a more correct direction than when they had started,” Bayne says.

Western Kentucky University professor Raja Bhattacharya, a faculty member with GSE, says many of the students’ final video marketing pitches, developed with free online tools, were “better than a professional might create.”

“By the end of the three weeks, they had taught us the tools we needed to pitch our business models with confidence,” says Brigid Neary, who graduated this year from Louisville’s Manual High School. Neary credits participating in GSE with helping her develop and expand Aberrance Quarterly, a high school-based magazine that was the brainchild of fellow Manual student and editor-in-chief Alexa Pence, into a national publication.