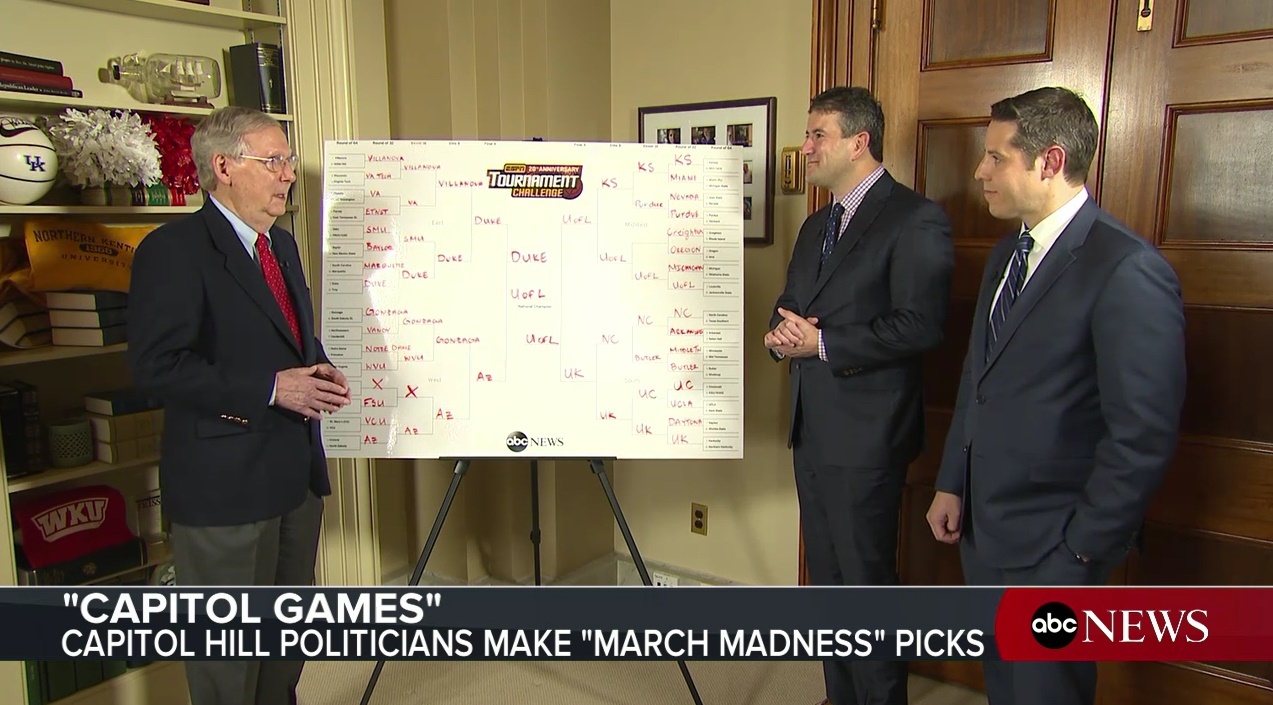 When the NCAA Men’s Basketball Tournament tips off, people in offices and workplaces across America will have one eye on their jobs and the other on the games.  That divided attention includes the U.S. Capitol, according to Senate Majority Leader Mitch McConnell (R-Kentucky).

“In the cloak room, which is the room sort of off the Senate floor, when the games are going on, we have votes, people are in there watching basketball,” McConnell told Capitol Games, a podcast produced by ABC News and ESPN, and co-hosted by ABC’s Rick Klein and ESPN’s Andy Katz. “They’re not out on the floor. And everybody… in every office I think is filling out brackets. We’re just like everybody else in the country. This is March Madness. We love it.”

In a video of the interview posted by ABC News, McConnell described how the Louisville television market generates the highest TV ratings for college basketball.

“More people watching college basketball than any other market in the country,” McConnell explained. “We’re fanatics.”

McConnell predicts that arch rivals Louisville and Kentucky will meet in the Final Four.

“I don’t know if there is a better rivalry,” said Andy Katz of ESPN.

McConnell acknowledged that Kentucky has a bigger fan base than Louisville. “It’s very, very intense. People care a lot about it.”

“I like both of them,” McConnell said. “I think people tend to pull for where they went to undergraduate school. But I pull for both of them. I like Calipari and Pitino a lot.”

“We have a lot of people who love to hate whoever you’re not for,” McConnell said. “But I’m not in that group.”

And McConnell made it clear that basketball is the top sport in the Bluegrass, topping even the Sport of Kings, Thoroughbred racing.

“I like it better than the Derby,” McConnell said. “I go to the Derby every year; it’s a big deal in Kentucky. But nothing’s bigger than college basketball in the commonwealth.”

McConnell, who first shared his completed NCAA bracket with Kentucky Living, walked through the bracket for the podcast. It includes a Final Four of all tw0-seeded teams: Louisville, Kentucky, Duke, Arizona.

“Duke is hot,” McConnell said of his prediction for the Blue Devils to advance to the championship game. “They knocked the Cardinals out and they’re on a streak.  They’ve got great talent. They had a kind of funky early part of the year but clearly got their act together when Coach K came back.”

“Honestly, this is a pick of the heart, not of the head,” McConnell said, gesturing toward his Louisville over Duke national championship prediction. “I’m not so sure Louisville can beat Duke.”

“They’re good,” McConnell said of Arizona. “You know, anything can happen. I don’t think there is a totally dominant (team). If you look at who’s playing well lately, it would be hard to bet against Duke.”

What would it mean to the state of Kentucky if Louisville and Kentucky meet again in the Final Four?

“It would be big,” McConnell said. “Look at the first round in Indianapolis. “We’ve got an upstart too. Northern Kentucky. They’ve never been before. There won’t be anybody left in Kentucky this weekend. They’re all going to be in Indianapolis.”

“They’re up and coming,” McConnell said of the Northern Kentucky Norse. “We had a little college, Union College, that actually won a lower division national championship this year. So basketball is hot in Kentucky even if the big teams are not your favorites. We like our basketball a lot. And Western (Kentucky University) has had a lot of good years too.”

“He quotes me all the time,” McConnell said of Kentucky coach John Calipari. “Because I said to Coach Cal, I said, ‘You’ve made more millionaires than a Wall Street firm. And so he’s used that frequently.”

“It’s a hot rivalry between two really great Hall of Fame coaches and Calipari has had the upper hand most of the time as they’ve been competing against each other, but Rick (Pitino) beat him this year.”

“They’ve had some bummers, too, like losing to Wake Forest away was not great,” McConnell said. “I think the reason (Louisville) ended up being a number two seed was strength of schedule, because losing eight times is not something to brag about.”

“Whether they can deal with a hot team like Duke, of course North Carolina is not doing bad either. UK has to deal with them. I’m hoping the Cardinals or the Wildcats make it.”

“There are always upsets, and typically it’s somebody you haven’t heard of that’s a lot better than you think,” McConnell said. “And I think those are two good examples.”

Asked whether his pick of West Virginia over Notre Dame in the second round has anything to do with making West Virginia Senator Joe Manchin happy, McConnell retorted, “they don’t have any chance against Gonzaga.”

McConnell, who attends many University of Louisville football and basketball games, talked about how Louisville’s entry into the Atlantic Coast Conference in 2014 has helped the program.

“I think it worked out well for U of L,” McConnell said. “They ended up in a league that everybody is in the same time zone. Travel is not bad. Great basketball league, and an increasingly great football league, look at what happened with Clemson.”

“I’ll tell you the guy that deserves credit for it is Tom Jurich, the athletic director at U of L,” McConnell continued. “When he came to U of L 20 years ago, the athletic budget was down around $8 or $10 million, now it’s well up over $100 million, way up over $100 million. And when they went into the ACC I think only Florida State had a bigger athletic budget. He did that outside of any power conference. Remarkable job, so if you’re looking for the guy who made it possible for Louisville to get into the ACC, it’s Tom Jurich.”

With college athletics such big business, ESPN’s Andy Katz asked McConnell if the athletes should be paid.

“They’re getting a free education,” McConnell replied. “An opportunity to get a degree. Most of them are never going to be professional. This also underwrites all the non-revenue sports that would be nowhere but for the revenue produced by football and basketball. These are amateurs. They ought to continue to be amateurs. They do get a lot out of it. They shouldn’t be paid, in my view.”