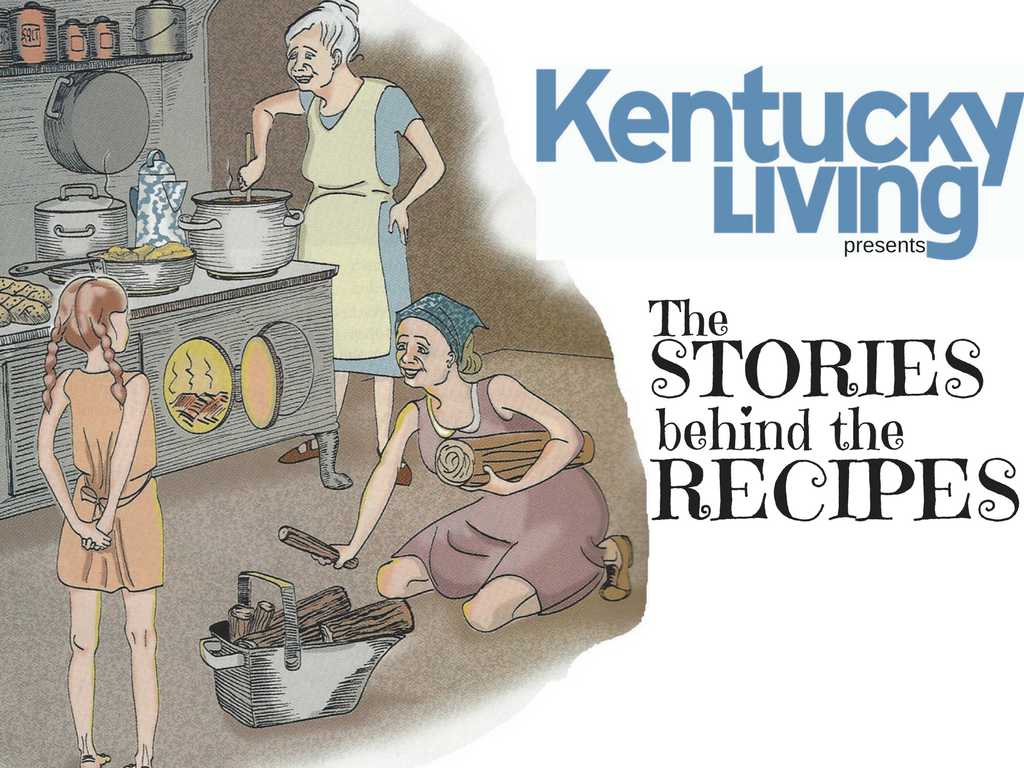 We want to hear the story behind your recipe. You can submit your Best Kentucky Family Recipe and the story behind it here. Submit an original recipe and your 250-word or less story for a chance to be featured in Kentucky Living’s June edition or on KentuckyLiving.com. Photos encouraged! Win $50 if your recipe is chosen to appear in the magazine or $25 if it appears online.

I distinctly remember the summer I was five. My mom and I drove into the heart of Kentucky so she could get in touch with her lost relatives.

Well, you could actually say we went to the mouth of the state, rather than the heart.

My great-grandma and all of my aunts, uncles, second cousins twice removed, nieces, and nephews were living in a one-mile radius near Pineville and the Tennessee border. Now, this area was referred to as the “holler.” The houses were made primarily of wood boards, still had coal-burning stoves, and some were still using well water. Unfortunately, there were no McDonald’s, Kroger, or even ice cream trucks to come singing down the streets each night at dusk. For a 5-year-old child, this lack of civilization was devastating. No Little Debbie snack cakes or bottles of Coke for me. All we had to eat were miles of cornbread, fried green tomatoes, chicken and dumplings, potato pancakes, burgoo, and fried chicken.

Soul food, country food, comfort food. Country and coal-mining life revolved around family and eating; a lot of this history and tradition has been lost since I was younger because the city is slowly but surely moving into the country. Frozen dinners take minutes, compared to the daylong event of making burgoo.

Saturday was market day and the older women of the family would pile into my mom’s car and off we would go to the only supermarket for 50 miles. Mom would pacify me by buying a bag of wax bottles filled with syrup that I would suck and chew on until nothing was left but a lumpy, colorless, flavorless mass. We’d return with pounds of bacon, bags of flour, and bags of vegetables and meats. But no matter how hard I wished, there were never any bags of Doritos or Rice Krispies treats. When we returned home, all the women would crowd into the kitchen and begin their sweaty, dirty work.

I soon grew tired of eating radishes at the table in the kitchen, and so I would wander into the woods or the creek bed. The hollow was so unlike the city where my mom and I lived; there was no fear of strangers or speeding cars. I could wander about for hours with nothing to worry about, except copperheads. Often I went off in search of blackberry bushes with my country cousins. We picked the sweet berries and then threw them at each other to try and stain our clothes and skin. Then we’d traipse off to the creek and slip off our sandals and skip from rock to rock in search of mudbugs and minnows.

I’d come back just before dark when the fireflies were starting to be visible and Mom would walk me down to the spring with her. We each carried back a bucket of water, which she would then put on the stove to boil. Uncle Bubby’s stove wasn’t like our four-burner gas stove at home that Mom always baked her horrible meatloaf in. This was an ugly, black, cast-iron stove that climbed to the ceiling. Wood and coal would have to be burned inside, and the top was flat so you could put as many pots as possible on top.

Mom stripped me and put me in the small, galvanized tub in the middle of the room while Granny rocked in her chair and laughed at my black-stained, dirty body.
I was cold, naked, and embarrassed. My cousins were still outside chasing grasshoppers; they didn’t have to get baths. Mom dumped a pot of hot water over me and scrubbed while Grandma flipped the chicken that was frying right next to us.

After I was dressed again, I was still moping about so Granny snuck me a piece of peanut butter log candy. It was the first candy I had had all week and I was ecstatic. Made with confectioner’s sugar, cream cheese, flour, and peanut butter, this was a homemade delight.

I ran onto the porch and ate the candy and was just in time to see the men returning from the coal mines. They were completely black from head to toe and my uncles and cousins proceeded to wash their faces in the basin and jug of water and wait for their own bath water to boil.

Dinner was a big affair. After preparing it all day, the spread was huge, since the men hadn’t eaten since breakfast. We had fried chicken, chicken and dumplings, fried cabbage, fried potatoes, and fried green tomatoes. There was a big pot of shucky beans with ham and cornbread too.

Now, you would think that all of the foods would be fried in vegetable oil or maybe a non-stick cooking spray: not so. For truly Southern cooking, only lard or bacon grease is acceptable. And such heavy foods did not in general produce an extremely obese group of people. The majority of inhabitants of the coal mine regions of eastern Kentucky and throughout the Appalachians are extremely poor. Therefore, the food has to be heavy to fill your stomach and keep you full for the rest of the day. And the chicken and dumplings are not just made with boneless, skinless chicken breast. An entire chicken was used. The dumplings were simply broth, flour, and eggs dropped into the boiling chicken soup. The eggs were also freshly gathered and used in making the fried tomatoes as well. And as any Kentuckian knows, you always use cornmeal: breadcrumbs are for Yanks.

Shucky beans are unique to the region. Green or string beans are picked from the garden and threaded with thick thread and strung up on a coat hanger and left to dry in the sun for a few days. After the beans are shriveled and dried, they are reheated and boiled with ham and usually served with hot cornbread. But beware of strings in the beans; they’re a hazard.

Sundays are special days in the hollows of eastern Kentucky. We would all get up early and those who hadn’t had baths recently were forced to get one. Then everyone would pile in a few old cars and head to church.

Upon returning, the cooking would begin again. Sunday brunch is nothing to shrug off. First lots of eggs would be gathered and pans greased for homemade biscuits and cornbread. Thick slices of ham and bologna would be fried and omelets filled with onions and potatoes were served with milk gravy over the biscuits.

The milk gravy was my favorite and the first recipe my mom taught me to make on my own. Just heat grease and butter, then add a few tablespoons of flour and then milk. The hard part is the continuous stirring that has to be done to keep it from being lumpy.

On special occasions, Great Granny and my grandma and her sisters planned ahead in order to make burgoo. This hearty stew was originally made especially for town meetings and political rallies and is found more in the western half of the state than the eastern. The women would all bring ingredients and spend the better part of the afternoon preparing it, and many claim that it is best if eaten the next day. Originally, it was cooked in a kettle over an open flame. The origin of the name is heavily disputed. Some say that it is a perversion of barbecue, a term that sailors used in the 18th century to describe the oatmeal-like stew they ate that was composed of bulgur wheat, or the French word ragout, which means a heavily seasoned stew. In a heavy kettle, pork, beef, and/or venison or rabbit are added. In another pot, three entire chickens are placed to boil. After several hours of cooking, the bones are removed from all of the meats and the meats are put into one kettle. Then potatoes, lima beans, corn, and any and every vegetable from the garden are added for the final hour or so of cooking.

Burgoo is a meal by itself, but my family likes to have dessert with it too. Two of my favorites are apple stack cake and banana pudding. Banana pudding is the easiest and is made by making banana or vanilla pudding and adding bananas and vanilla wafers. A recipe with more history is the apple stack cake. It is said that in the past when marrying couples in the hollows were too poor to afford their own wedding cake, each neighbor would bake a cake layer and bring it over to the bride’s home. As each layer arrived, it was smothered in a sweet cinnamon applesauce mixture that would hold the cake together. The couple knew how popular they were by how many layers of cake they were given.

After eating a bowl of stew and a slice of cake, we would end a Sunday evening with some of Granny’s stories, or Uncle Bubby’s songs. There really wasn’t much else to do, and there was no possibility of driving to a theater to see a movie, or a television to turn on.

The foods and recipes of Appalachia weren’t just about grease and gravy and opossum stews. The food was filling and solid like the people. It took time to prepare and was made from simple ingredients that were reasonably priced. And because women spent so much time in the kitchen together, there was a certain bond that developed.

When I eat any of the foods that were prepared that summer long ago, I am immediately brought back to the hot kitchen and the sounds of food frying. Each recipe, each ingredient, has its own memory and history. It’s important that the culture and traditions aren’t lost. It is important that the skinny little girl with blackberry stains on her face isn’t forgotten along with those recipes in favor of Minute Rice and TV dinners. Because the food we eat should be a part of our culture and who we are.