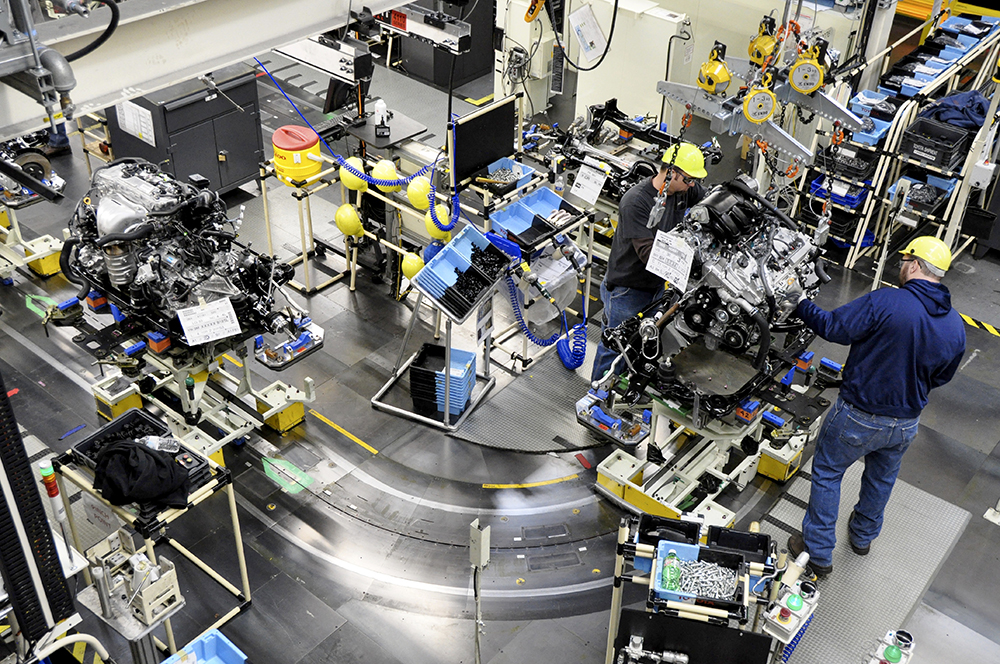 Team members at Toyota Motor Manufacturing Kentucky (TMMK) in Georgetown, Kentucky, work on the engine sub-assembly line. One of the most well-known names in the Kentucky automotive industry, Toyota invested more than $1.5 billion in the state in 2017 alone. Photo: TMMK

On a 7-mile stretch of Interstate 65 just north of the Tennessee border in Simpson County, the landmarks and road signs say a lot about what drives Kentucky’s economy.

But, those same I-65 drivers might just as easily miss a major economic development story of Kentucky that also comes alive on that same stretch of highway.

Now under construction is a 101,000-square-foot manufacturing plant that—by this fall—will join the ranks of more than 500 automotive industry facilities across Kentucky. Taeyang Metal Industrial Co. Ltd., which makes fasteners and cold-rolled steel products, announced in November its plans to invest nearly $15.6 million and create 76 full-time jobs at the new plant.

Taeyang’s automotive neighbors in Franklin include a company that makes stabilizer bars and another that manufactures anti-vibration and noise reduction parts.

Across the commonwealth, the auto industry employs about 100,000 people and contributes $14 billion annually to the state’s gross domestic product. In 2016, Kentucky plants exported $5.5 billion in vehicles and parts.

“At the end of the day, we’re a manufacturing state,” says Dave Tatman, executive director of the Kentucky Automotive Industry Association (KAIA).

Toyota external affairs analyst Ashley Chatham says full-time employment is at “an all-time high.” Of its more than 8,000 employees in Georgetown, 1,209 of the positions were new in 2017. Add the work created at Kentucky parts plants due to Toyota’s business, and the company claims responsibility for 15,296 jobs—a number higher than the population of many Kentucky towns. Of the more than 350 companies in the U.S. that supply parts and commodities to Toyota, more than 100 are located in Kentucky.

Kentucky’s automotive success is tied to both workforce training and co-location to suppliers.

“Our automotive industry is clustered around the I-65/I-75 corridor between Cincinnati and all the way to Tennessee,” Tatman says. Take the Corvette plant, for example. Just off I-65, it employs 1,004 people, paying $88.58 million in wages annually.

Kentucky ranks third nationally in production of passenger vehicles and first in vehicles produced per capita.

“We are confident Taeyang will find success in Simpson County, thanks to the pro-business environment that exists across Kentucky,” Bevin says.

One key factor in the efforts of Kentucky’s Cabinet for Economic Development to attract automotive companies is Kentucky’s competitive utility rates. In its marketing materials, the cabinet reminds manufacturers that “Kentucky’s industrial electricity rates are the lowest in the eastern United States.”

The Taeyang plant is in the service territory of Warren RECC, which worked with the Tennessee Valley Authority and local and state officials to market the 30-acre site at the Henderson Interstate Industrial Park.

“Taeyang Metals marks the first Korean company to locate a manufacturing facility in Franklin,” says Simpson County Judge-Executive Jim Henderson. “Simpson County has numerous corporations from both Asia and Europe that have located in our area and we believe that more such companies will locate here in the future. The jobs that Taeyang Metals will be providing will continue to enhance our local and state economy.”

The Bardstown and Nelson County economies will also get a boost from a new manufacturing facility—Thai Summit will open a stamping and assembly facility there early this year.

“Thai Summit will have a significant economic impact today and for many years as it’s a $110 million investment that will employ 216 people,” says Kim Huston, president of the Nelson County Economic Development Agency. “This makes it one of Bardstown’s largest industrial projects in the last 10 years.”

The company “will produce products for the Ford truck plant in Louisville and (is) currently in discussions with Tesla,” Huston says. “Bardstown’s close proximity to the Louisville facility and the good highway system were two factors that were important in their search process.”

Another was the good relationship with Salt River Electric.

“Salt River Electric plays a critical role in all of our recruitment efforts and is part of our economic development team that meets with each company during the site selection process,” Huston says. “To Salt River, it’s about more than just selling electricity to clients, it’s about working with Bardstown Industrial Development Corporation, the city and county and helping to strategically plan for Nelson 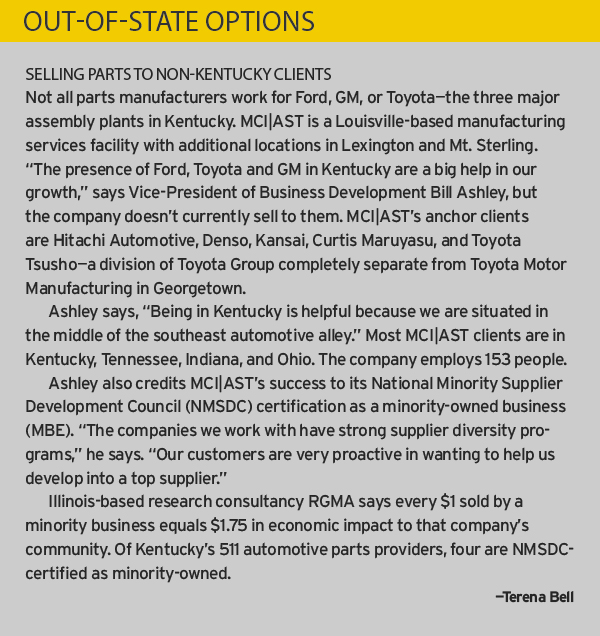 Salt River Electric CEO Tim Sharp says, “We worked with Thai Summit’s Lexington builder to meet their deadline for the project that’s located in the Nelson County Industrial Park. East Kentucky Power, our generation and transmission co-op, expanded the Bluegrass Parkway substation and we built a new three-phase circuit, running it one-half mile to serve them.”

He says he expects the company’s energy load to be 2-2 ½ megawatts when fully operational, which would make it one of Salt River Electric’s top 20 customers.

“Thai Summit is a great addition to our community,” says Sharp. “They are a good business offering good-paying jobs, which will enable people to earn money, to buy things and contribute to the local economy—all things that help make a community successful.”

Auto industry jobs are considered especially valuable to state economies because of their especially high “multiplier effect.” From suppliers to restaurants feeding the workers, auto jobs spin off more economic activity and more jobs. A study prepared for KAIA by the University of Louisville’s Urban Studies Institute concluded that for every 100 jobs in light truck and utility vehicle manufacturing, a total of 424 jobs are supported in the broader economy.

New employers are creating positions, too. In April 2017, Braidy Industries made a $1.3 billion commitment that Bevin says “has the potential to be as significant as any economic deal ever made in the history of Kentucky.” The plant, which will manufacture rolled aluminum for the automotive and aerospace industries, is projected to bring 550 new jobs to Greenup County.

“The challenge we have in our state … is workforce,” Tatman says. “We have so many open jobs, but we’ve spent the last two generations telling American youth that the only path to success is to go to college and get a degree and go to work in an office.” After years of saying “don’t work in manufacturing because it’s dirty, dark and dangerous,” Tatman says jobs now sit open statewide, waiting for people to work them. In southern Kentucky, for example, there are currently 5,500 unfilled positions.

“The challenge is finding those who are unemployed, underemployed, retiring veterans or high school students and convincing them that these jobs that we have in manufacturing are good, high-paying jobs with good benefits—and they’re in places where people grew up,” he says. “If I go to any of those (automotive) manufacturers, in most cases they’ll tell me that the biggest problem they’ve got is finding qualified workers.”