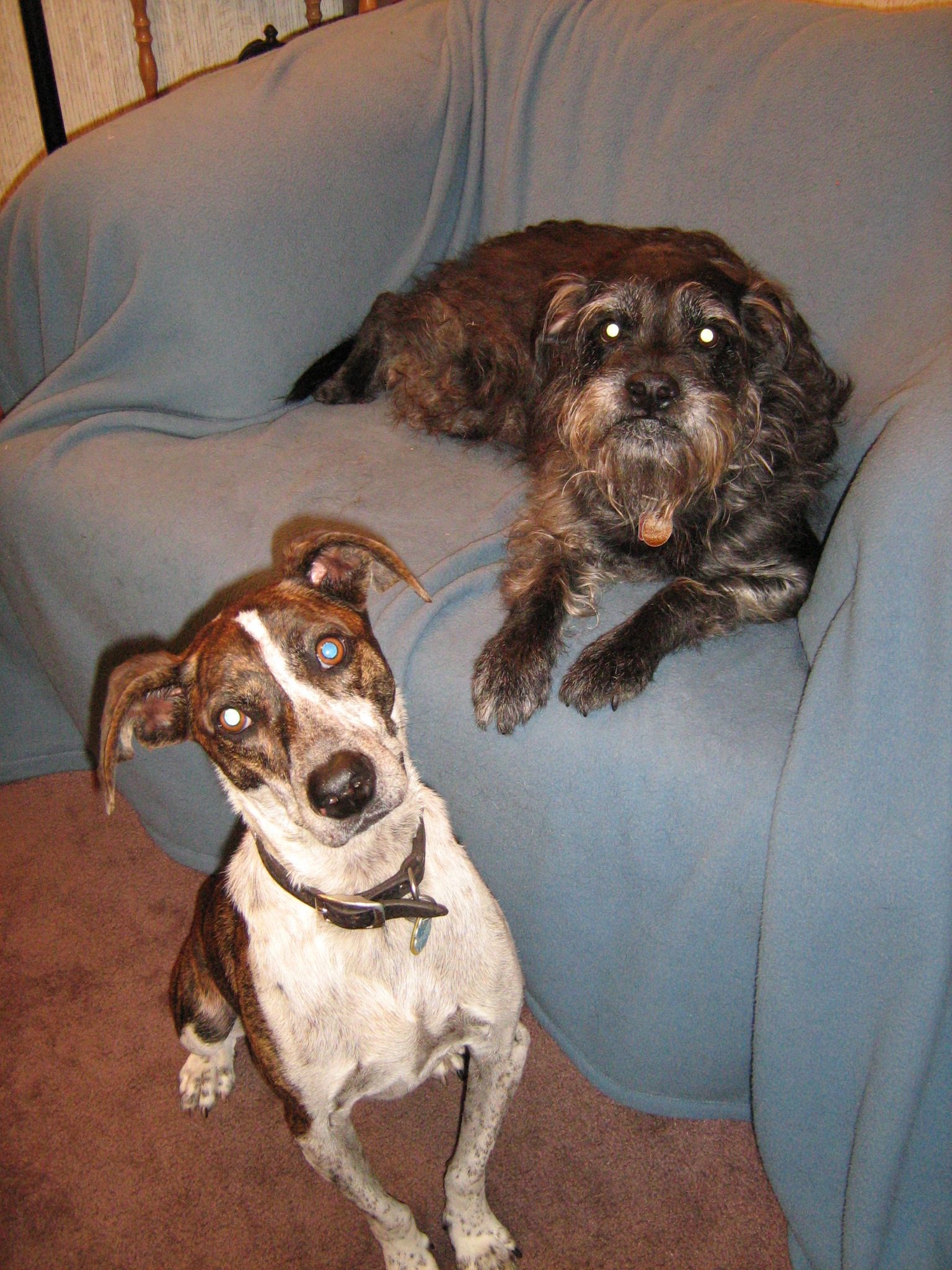 One thing I’ve learned writing this column is that people, without exception, love to tell their animal’s story of rescue. Whether I’m at a shelter, an animal fund-raiser, or hanging out with friends, pet owners spill over with funny, sad, or harrowing tales.

And I’m no different. Family hour at my house consists of cuddling with my animals while I tell each one about how they came to live with me. I’d like to think they enjoy the stories. So let me share some of these stories with you, and read on to learn how you can share your own stories in a future Creature Comforts column.

I really didn’t need another dog—there were plenty of dogs, cats, and horses on the farm where I live. But when I visited the Animal Care Society in Louisville, something about a lanky, floppy-eared dog named Radar appealed to me. Radar barely escaped with his life—he was pulled from a kill shelter just before he was due to be euthanized. Luckily, somebody thought this German short-hair mix was worth saving.

Bringing him home was a fairly easy transition. The first thing he did upon arrival was get on the couch for a nap. Addie, the female dog I had at the time, promptly beat him up, so the alpha dog decision was made early. He took it well.

Then we hit a rough patch. Radar forgot he was housebroken, couldn’t hear me the first five times I told him to come, and in general made a nuisance of himself. I finally called his foster mother and, not wanting to hurt her feelings, tentatively asked if she thought Radar was very smart.

I kept working with him, and things gradually got better. He hasn’t had an accident in the house since those early days, and now he comes on the third call.

And he’s smarter than I thought.

About a year after I adopted Radar, I took him to a fund-raiser. I was standing in line at a food booth when I heard a voice from far behind me call out, “Radar! Is that you?”

Radar whipped around, yelped, jerked the leash out of my hand, and streaked across the park where he hurled himself into a woman’s arms. I was totally perplexed, and then awed when I found out she was Radar’s foster mom. My friends gaped, I cried, and after a joyous reunion, Radar was content to come back to me.

My giant schnauzer mix, Ella, has the distinction of having survived two kill shelters.

She was also destined to be in my family. When I decided to adopt another dog, I knew I wanted a schnauzer, and I’d been thinking the name Ella would be very pretty. So when I found a schnauzer at the Christian County Animal Shelter already named Ella, I dropped everything and ran.

Ella’s story broke my heart. She was originally adopted by a military couple from a shelter in Arkansas. That was the first time she escaped death. The couple was later transferred to Fort Campbell, Kentucky, and all was well until they were called up to serve in Iraq. With little time to sort out their affairs before shipping out, they had no choice but to turn Ella in to the Christian County shelter. To buy her some time, they paid the shelter to keep her as long as they could. But it was only a matter of time for a shelter that serves three counties, and lots of dogs were being turned in by service people.

Ella was friendly but a bit reserved. She struck me as a very dignified dog. It wasn’t long, though, before she bonded with me and became the most loyal dog I’ve ever had. As I got to know her better, I found she had been extremely well trained and socialized. Her first parents had done an excellent job of raising her, and obviously had loved her greatly. I still wish I could tell them Ella is okay.

Ella has since become something of an inspiration to me. Here’s a dog that’s been in two kill shelters that I know of, and yet has maintained a cheerfulness and love of life you don’t often see. She never makes demands for attention, choosing to ask politely when I’m not busy. I can’t tell you how many times I’ve turned around from washing dishes or making the bed to find her quietly sitting behind me, just waiting. She seems grateful for the life she has.

I think we could all learn something from this dog.

Obviously, I’m a dog person. I don’t particularly care much for cats—they should all live in the barn, earning their keep by catching mice. There’s a perfectly logical explanation why I have three cats living in my house.

Little was the runt of the litter born to a feral barn cat. I might not have paid much attention to her except for a habit she developed as she grew up: she was determined to go with me every time I walked the dogs in the back fields of the farm. Every day she’d wait by the barn door, falling in behind the dogs and me. She struggled to keep up, but she never quit. Every time I looked behind me, there she was, her small body making its way through the ever-taller grass.

When the weather turned hot and she started panting halfway through our walk, of course I picked her up and carried her home. Sweaty myself, it wasn’t great fun to lug a hairy cat, but she seemed to enjoy it, and it became part of our routine. I wasn’t attached to her, though; she was just a barn cat.

So when I returned from a weekend trip and Little was gone, I panicked. I looked for her, but how do you find 4 pounds of cat on a 200-acre farm? I’d never known her to leave the barnyard except for our walks, so I couldn’t imagine what got her.

She showed up back at the barn days later, purring and preening…and a hind leg dangling horribly. At the vet’s, X-rays showed she had been shot. My vet, a wonderful man named Mike Johnson, said there were three options: perform a $1,000 operation to fix the leg, amputate the leg, or put Little to sleep.

Fixing the leg was not an option. I considered putting Little to sleep. It seemed the kind thing to do. She was just a barn cat. I told Dr. Mike my decision.

Today, Little wakes me each and every night with her incessant snoring. I can barely remember a time when I didn’t have this three-legged girl in the house, and she makes me laugh every day. Despite her smallness and missing leg, she’s the one who stirs up trouble by lurking around the corner ready to take a smack at whoever comes her way. And she’s nothing but a blur when she streaks through the house—all those walks turned out to be helpful.

Having lived her first two years outside, I wondered if she missed it. After she had fully recovered, I took her outside to see how she’d react. She immediately screeched and hid her face in my neck. Her answer was clear: she’ll always be an indoor cat.

Seña and Niña were littermates, but came to live with me at different times. Seña fell out of the hay shed nest when she was 3 weeks old, and despite an afternoon of coaxing, the mother refused to take her back.

After raising her in the house on a preemie bottle, it seemed cruel to relegate her back to the barn. So she stayed, and became the most ungrateful wretch of a cat I’ve ever known. She refused to be held, barely tolerated a quick pat, and sneered at the dogs.

Then came the day she slipped out the back door and got under the house. Her cries told me she couldn’t find her way back out, and I was sorely tempted to leave her there. But her crying was interrupting my nap, so I crept along the bottom of the house until I found a place I could reach in and get her. She surprised me by allowing herself to be dragged out in a most undignified manner, and humbly let me carry her back into the house.

I unwittingly created a monster: now Seña can’t get enough love and attention, and I have to scrape her off me.

While Seña was being bottle-fed, the mother cat had decided she didn’t appreciate my interference and moved her litter. I was a little disappointed—I’d become attached to one of the babies I called Niña. Niña was different from the other babies: whenever I peered into the nest, the feral kittens all hissed at me, arching their backs and warning me to stay away. Not Niña. She would jump up and toddle over to say hello every time. I was greatly entertained by this.

When the kittens were moved, I figured I wouldn’t see Niña again until she was grown, and by then she would have forgotten me.

One cold morning in January, during a horrific rainstorm, I was tromping out to the barn to feed the horses when I heard a terrible crying by the tobacco barn. It seemed to be coming from a tree, so I got a flashlight and climbed up the fence. I couldn’t believe it—it was Niña, now 5 months old, stuck in the tree, cold and wet. The tree had no climbable branches, and I had no clue how to get a now-feral cat out of there.

No worries. As soon as she saw me, Niña stopped crying and leapt right in my arms.

I don’t know why this feral-born cat loved people from the moment she was born, and I can’t explain why she was so friendly after months of no contact with a human. All I knew was that I wasn’t going to let her get away again, and she now reigns as the long-haired beauty queen in my home.

And that’s my family. Most of it, anyway. Some things have changed: all the barn cats are now fixed, Ella is showing her age, Radar has stopped bringing me possums from the woods. What has not changed is my ever-growing respect and love for animals everywhere.

And now it’s your turn: if you have an animal rescue story you’d like to share, please send it to me at psparrow@kentuckyliving.com. Send a clear digital picture along with your story, and maybe it will be included in a future Creature Comforts column.

I look forward to hearing your stories.