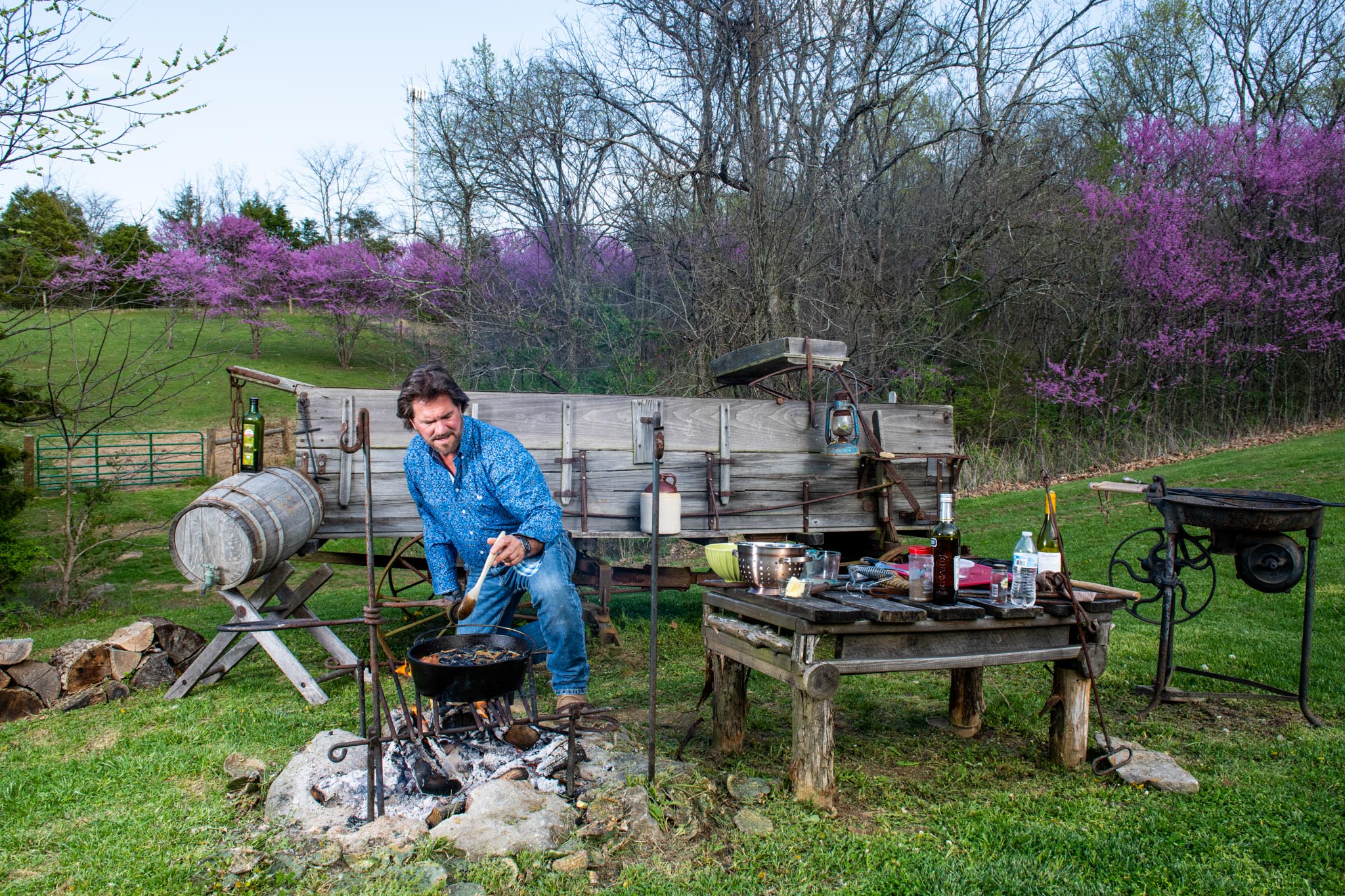 Farmer’s rustic surroundings are a perfect setting for the “cowboy cooking” he loves. Photo: Tim Webb

The “old ways” of cooking get a modern venue

Tim and his wife, Nicki, have produced and hosted the show since 2012. Tim says the idea came from his love for cooking and the outdoors. “I’ve cooked for as long as I can remember,” he says.

During the half-hour program, Tim and Nicki share recipes for home-cooked meals along with cooking tips from their Franklin County farm. They film in their kitchen or head outdoors for some “cowboy cooking” over an open flame. “It’s a TV show dedicated to preserving the old ways when it comes to country cooking,” Tim says.

He brings his love of hunting, fishing and the old ways to the show. The old ways, he explains, involve using what you have around you and learning techniques such as canning; curing and smoking meats; rendering lard; or knowing the best way to slaughter a hog.

“I’ve learned so much from older people. They have information and knowledge,” Tim says. “When I was young, I’d see these ‘old cats’ packing a squirrel or running a trap line down at the creek and I’d run toward them with wide eyes, wanting them to share how they did that.”

On Tim Farmer’s Country Kitchen, viewers get a glimpse of Nicki and Tim’s everyday life, from farm chores to preparing and cooking delicious food. “When we’re cooking in our kitchen, it’s not a set, it’s kind of unscripted and it’s just us,” Nicki says. “We like to cook and we have fun!” The show is family-owned. Tim and Nicki’s daughter, Kelli Kinman, is the co-executive producer.

The show is more than just pots and pans and pulling finished dishes from the oven. “When we go fishing, we actually show how to clean the fish,” Tim explains. “In the spring, we might go out and identify different mushroom species or we’ve gone through the process of tapping trees for syrup and then actually made the syrup on the show. It’s not just cooking. It’s everything around it, too.”

It’s as if everything Tim Farmer experienced in his life has led him to be doing just what he is doing now. His goal as a young man was to serve as a U.S. Marine but a tragic motorcycle accident while on leave left Tim without the use of his right arm. “I said to myself, ‘How in the world am I gonna fish and do the things I love? I had to adjust and learn a whole new way,’” he says.

Through the years, Tim has helped many others with disabilities have a “can-do” attitude toward life. For Tim, it has meant being an outdoorsman, cooking and enjoying his family. Among other things, he taught himself to bow hunt by using a strap between his teeth to pull the bow.

After the accident, Tim went to work for the Kentucky Department of Fish and Wildlife Resources and eventually became the host of Kentucky Afield, serving 20 years on the outdoor TV show featuring wildlife, hunting and fishing.

Then Tim met his cooking mentor, Raoul Desprez, pictured. “He made me realize that there is magic in cooking,” Tim says. Desprez, a French chef, would visit his daughter in Frankfort, who was Tim’s neighbor. “I learned so much just working beside him and soaking it all in. I would bring him wild game and he would share secrets about stock, sauces and balance in flavors. I wouldn’t be a tiny tad of the cook I am if it hadn’t been for Raoul,” says Tim.

He says Desprez told him he had to have an “intense sniffer” to be a great cook. “He would test me by asking me to tell him the ingredients of whatever he was cooking just by tasting and smelling it,” Tim says.

A watched pot: Farmer waits for his fire to heat up. Photo: Tim Webb

Tim and Nicki sometimes welcome guests to the show. One episode around Thanksgiving had guest John Swaim demonstrating how to cook Trash Can Turkey over an outdoor fire. At times, the show takes field trips to showcase people like “Miss Helen” (Georgia Conley) who makes delicious fried apple pie; or Bobby Joe and Lois Ellis, who share practical gardening tips and what to make with your garden bounty.

During the show, there’s an easy, conversational banter between Tim and Nicki that makes viewers feel at home. They close their show each week by saying, “good food, good friends, good eats,” which is certainly a testimony to their life—on and off—of Tim Farmer’s Country Kitchen.

Tim Farmer explains how he has overcome losing the use of his right arm from a motorcycle accident as a young man—and watch him shoot a bow and arrow to prove it.

Farmer explains exactly how that special bow works in this video.

Tim Farmer is also a gifted songwriter and musician. He wrote the Emmy-nominated theme song for Tim Farmer’s Country Kitchen in his home studio.

Tim and his wife, Nicki, show how they record their music in their home studio.