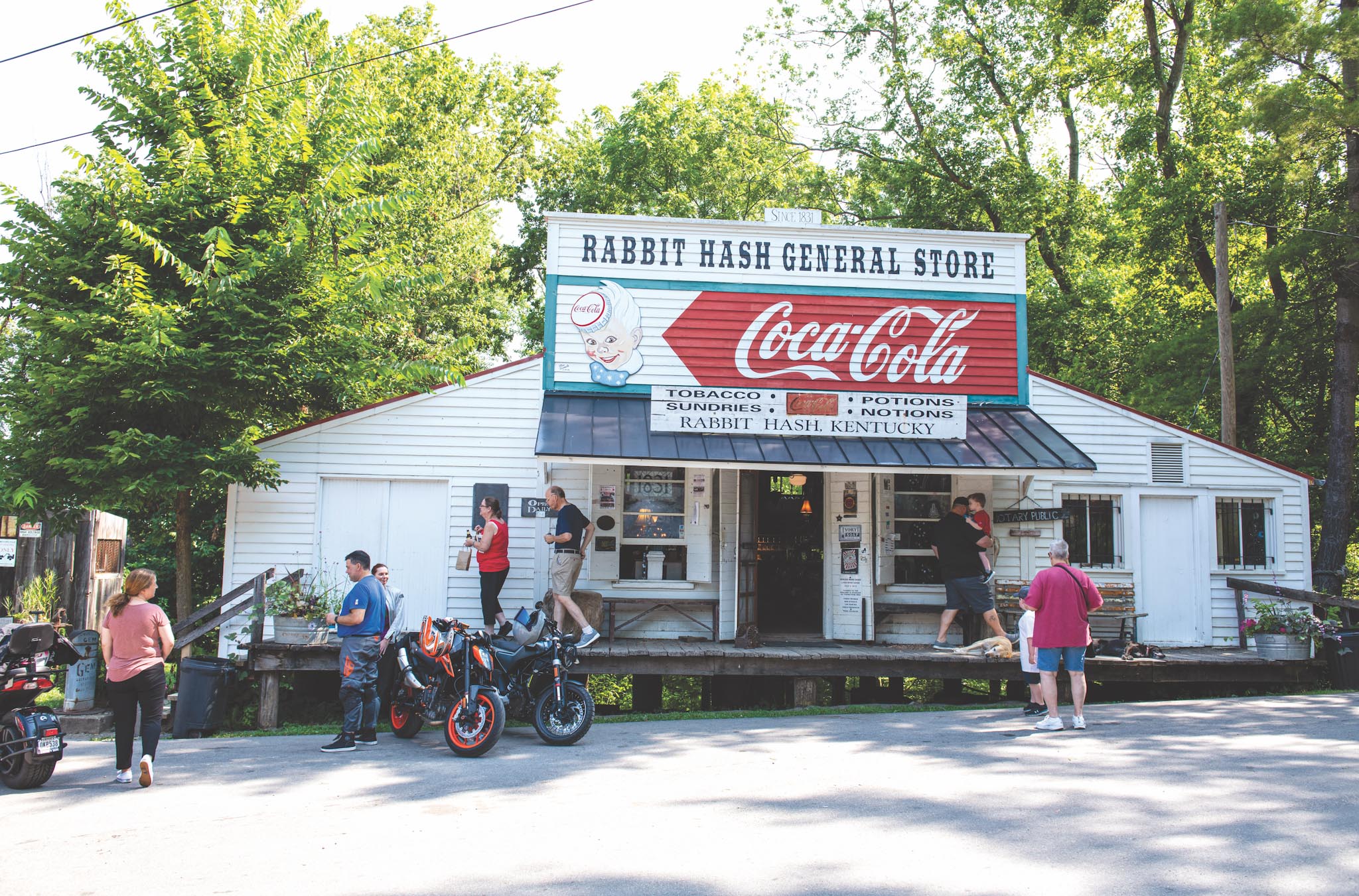 Sunny weekends in Rabbit Hash bring out the crowds to browse artisan-made brooms, soaps, pottery and more at the Rabbit Hash General Store; and poke among antiques and Kentucky-made collectibles at Folksiders. They may also be found sipping a glass of wine in the tasting room of Gunpowder Creek Vineyards and munching on tacos and other Tex-Mex goodies from Chef Hip E’s Cocina Loca.

“Also, the mayor has his own ice cream truck he brings down on the weekends,” says Bobbi Kayser, president of the Rabbit Hash Historical Society. She is referring to Wilbur, the French bulldog who won the 2020 mayoral election in this tiny town of less than 500 perched on the Ohio River in rural Boone County.

For a town measuring a mere 3.5 acres, there is a lot going on.

At the center of all the hubbub is the Rabbit Hash General Store, a little engine that could that has survived floods and fires since it opened for business back in 1831, including a fire in 2016 that nearly destroyed this piece of pure Americana. The beloved landmark, served by Owen Electric, was painstakingly rebuilt a year later, using both salvaged and era-specific materials.

Terrie Markesbery is the proprietor and manager of the General Store as well as the innkeeper at the Old Hashienda, the charming lodging located right across the street. Both exude an old-timey vibe through the yesteryear goodies on the shelves and the old-fashioned decor at the inn.

“I have worked very hard to create a welcoming atmosphere and an eclectic collection of products, goods and antiques,” says Markesbery. “It’s super interesting to walk through the store and shop the stock of items ranging from handmade leather goods to Rabbit Hash gear to artisan incense and candles.”

On hot summer nights and during cold weather months, Markesbery brings in bands from Cincinnati, Lexington and Louisville. Barn dances take place once a month in the summer and every Sunday in the winter, January through March.

With the Old Hashienda, Markesbery has lovingly decorated one of Rabbit Hash’s historic buildings to create a homey and rustic retreat. Here, visitors can enjoy sitting a spell on the porch swing to watch the riverboats glide along the Ohio, lighting up the authentic woodburning stove to ward off the chill of a cool evening and listening to live music from the comfort of their own place.

The inn has an equipped kitchen, queen bedroom, separate sitting room, full bath and free Wi-Fi access. It also has free private parking, a valuable amenity in a place that fills up on the weekends with locals, area bikers and tourists.

“We like to say, ‘All roads lead to Rabbit Hash,’” says Kayser.

“There is an undeniable magic and appeal that blanket this little town that is hard to describe but easy to feel,” says Markesbery. “It seems that after you get here, no matter what drew you in, the sense of community that is created and nourished by our locals will continue to capture your attention.”

The Rabbit Hash General Store, 10021 Lower River Road, is open daily 10 a.m.–6 p.m. Learn more about the store and the Old Hashienda or call (859) 586-7744. Mayor Wilbur has his own Facebook page and is known to make a special appearance at various functions. (And if he can’t make it, ambassadors Jack Rabbit, a hound dog, and Lady Stone, a border collie, step in for him.) Learn more about the Rabbit Hash Historical Society call (859) 468-5366. Both are served by Owen Electric.