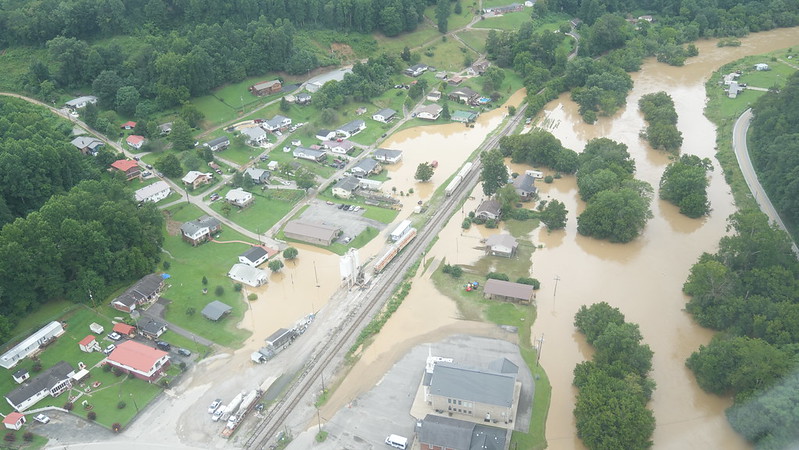 A helicopter view of Eastern Kentucky flooding on July 29, 2022. Photo: Commonwealth of Kentucky

The scale and horrific deadly toll of devastating flash flooding in eastern Kentucky is still unfolding as rescue crews and emergency responders try to locate the missing and assess the destruction.

At least 19 people have been killed in the natural disaster, including four children, Governor Andy Beshear confirmed Friday afternoon.

“We saw many homes that are still inundated, that the water has not receded,” Criswell said. “I mean, we also saw homes I think that are going to have access issues for some time just because the roads are out and bridges are out. And so we know that there is definitely some significant impact to the communities that we just flew over.”

Even as search and rescue efforts continue for dozens, if not hundreds of people who still remain unaccounted for on Friday evening, the long-term nature of the disaster is hitting home for countless people whose homes and belongings were destroyed in the floodwaters.

Meanwhile, emergency officials continue to urge caution as some rivers and streams are still cresting.

“We are still focused on meeting the immediate needs of providing food, water and shelter for thousands of our fellow Kentuckians who have been displaced by this catastrophic flood,” Gov. Beshear said. “At the same time, we have started on the long road to eventual recovery.”

The Governor toured the flood-damaged area today with stops in Hazard (Perry County), Leburn (Knott County), Hindman (Knott County) and Whitesburg (Letcher County). He said 359 survivors are being temporarily sheltered at 15 shelters and at two state parks and campgrounds. Shelter sites can be found at governor.ky.gov/FloodResources.

Death Toll Continues To Rise
Gov. Beshear announced today that the death toll from the devastating floods has now risen to 28. Deaths by county are as follows:

Individual Assistance Available in Five Counties
Today, FEMA announced that renters and homeowners of Breathitt, Clay, Knott, Letcher and Perry counties who were affected by the severe storms, flooding and mudslides that began July 26 may apply for individual disaster assistance.

Gov. Beshear said he expects additional counties to qualify for individual assistance as FEMA teams continue to assess the damage: “I fully expect more to be added as was the process in responding to December’s tornadoes.”

Applications can be filed online at disasterassistance.gov, by calling 800-621-3362or by using the FEMA mobile app. If you use a relay service, such as video relay (VRS), captioned telephone or other service, give FEMA the number for that service. To learn more, see the full release.

The Governor said it will be important when applying for assistance to have some critical information in hand, including:

Survivors with homeowners, renter’s or flood insurance should file a claim as soon as possible. FEMA cannot duplicate benefits for losses covered by insurance. If your policy does not cover all your damage expenses, you may be eligible for federal assistance.

In addition to multiple state and federal agencies, Missouri Task Force 1 has been activated by FEMA to assist with response.

“Once the team arrives at their destination, the task force will prepare for whatever mission they may be assigned,” the Kentucky Division of Emergency Management said in a statement. “These missions could include water rescues, wide area search, targeted searches or even humanitarian welfare checks.”

Friday afternoon the Governor announced that President Biden had approved his request for a federal disaster declaration for 13 eastern Kentucky counties. To learn more about the federal declaration and to read additional updates on the response to the flooding, click here.

To learn more about the federal disaster declaration, see Friday’s release from the White House.