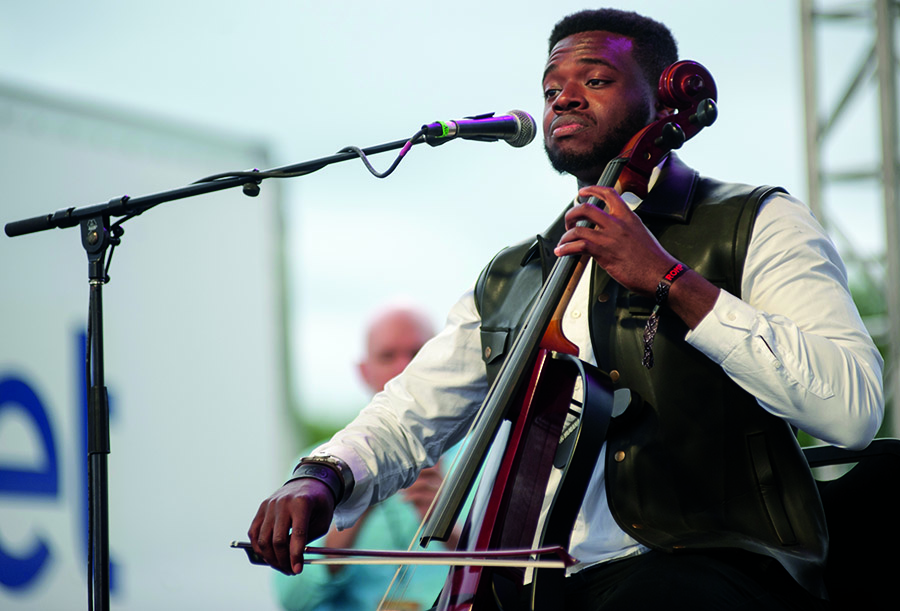 Olusola, who grew up in Owensboro, plays the cello at ROMP in 2017, where he was an honored guest. Photo: Shaun Conklin

He hops on the phone line, a little breathless and apologetic for being a few minutes late. He is polite and engaging, and it takes a minute to remember that this is the three-time Grammy winner and beatboxing, cello-playing member of the wildly popular singing group, Pentatonix, and not your favorite nephew.

Kevin Olusola, 29, came to the group’s attention as it was forming for the third season of The Sing-Off, the televised competition for a cappella groups. One of the members saw his YouTube video and they invited him to join them. On a whim—a cappella groups are not usually perceived as a ticket to the top in the musical world—he agreed. They met one day, auditioned the next, and walked off with the show’s top honors in November 2011. Olusola has never looked back.

He is a busy man these days, recording and touring the world with Pentatonix. His musical abilities have been recognized by Quincy Jones and Yo-Yo Ma. He recently returned from Israel, where he was presenting at the Forbes Under 30 Summit for young entrepreneurs. He writes music and arranges, and works on solo projects and collaborations.

Olusola seems as enthusiastic for the work as he was early on, when their album That’s Christmas to Me went platinum. Though he lives in Los Angeles now, he speaks fondly of Kentucky and his childhood in Owensboro.

“The arts program in Owensboro was amazing, especially for kids,” he says. He rattles them off—the Youth Orchestra, band, the family-oriented New Year’s Eve events at RiverPark Center.

His parents had moved their young family from Philadelphia to Owensboro to find such opportunities in a quiet, small-town setting with good schools. His father set up his psychiatry practice and Kevin spent most of his school years here, intent on admission to Yale University and following in his father’s footsteps as a pre-med major.

His relationship with the cello might not have happened had he not tagged along for his sister’s music lesson one afternoon. Her teacher, Dr. Joan Mack, suggested Kevin give the cello a go. She had an old one, beat up and taped in places. He took it home and began playing around with it. Soon he, too, was taking lessons from Mack.

His childhood friend and fellow cellist, Harrison Bryant, says, “Kevin doesn’t shy away from anything. In fact, he can’t wait to learn all he can about whatever new thing he is excited about.”

Olusola picked up the saxophone in fifth grade, an instrument with which he also earned accolades and distinction, just as he continued to excel in cello. His band teachers, Paula and Danny Humphreys, remember how he stood out in class. “He was exceptional in that he would take a concept, play around with it, tweak it, make it his own,” says Paula Humphreys. This is much like what he did with his cello and beatboxing, combining his passion for both in a new and creative way. In beatboxing, the voice is used to imitate the beats of percussive rhythms.

Olusola’s high school principal, Anita Burnette, remembers that “everyone loved him,” both teachers and students.

“He was such a great kid—intelligent, talented, positive attitude, enthusiastic. I never saw that child without a smile on his face,” she says.

He was gifted musically, but he was also an exceptional student. When he left Owensboro High School for Phillips Academy in his junior year, he had taken every honors class available to him.

As a musician, Bryant understands the depths of his friend’s talent, but Olusola says it takes something more than talent.

“I believe raw talent is maybe 15 percent of the equation,” he says. “Fifteen percent is a gift. The rest is mindset, focus and discipline.”

He gives Mack credit for helping him learn “exactness.” She was a taskmaster for precision and excellence, and years later, he drew on exactness and repetition when he set about learning Chinese as a result of a trip to China after his freshman year at Yale.

“His parents deserve a great deal of credit for keeping him grounded,” Humphreys says. Kevin says he appreciates their influence on him and his brother, Kellon, and sister, Candace.

“My parents told us, over and over, ‘always to be extraordinary and uncommon.’ We heard this all the time,” he says.

They surely have led by example: Their own story is compelling. The Olusolas met in California, while both were students. His father, Oluwole, had arrived from Nigeria with only a suitcase and the dream of becoming a doctor. Kevin’s Grenadian-born mother, Curline Paul, was a nurse, pursuing a master’s degree in public health.

While beatboxing was his entry into the world of professional music, he never listened to hip-hop at home.

“At our house we only listened to classical music, some soft rock, maybe Delilah at night,” he says. He first heard beatboxing at Phillips Academy, and dived into it with his typical curiosity and passion.

His father was not impressed with his son’s newfound skills.

“He hated it,” Kevin laughs. But he says when his father learned there might be some money in it, well, perhaps beatboxing had promise—puzzling, but worth pursuing.

Olusola completed a degree in East Asian studies, but has put his medical studies on hold. After seven years in the music industry, he is taking stock, thinking about how he wants to grow as an artist, what his success means and how best to use his gifts.

He speaks with a humility and kindness that a Southerner might say is the result of good home training. That, along with talent, discipline and joy will get you “extraordinary and uncommon” every time.