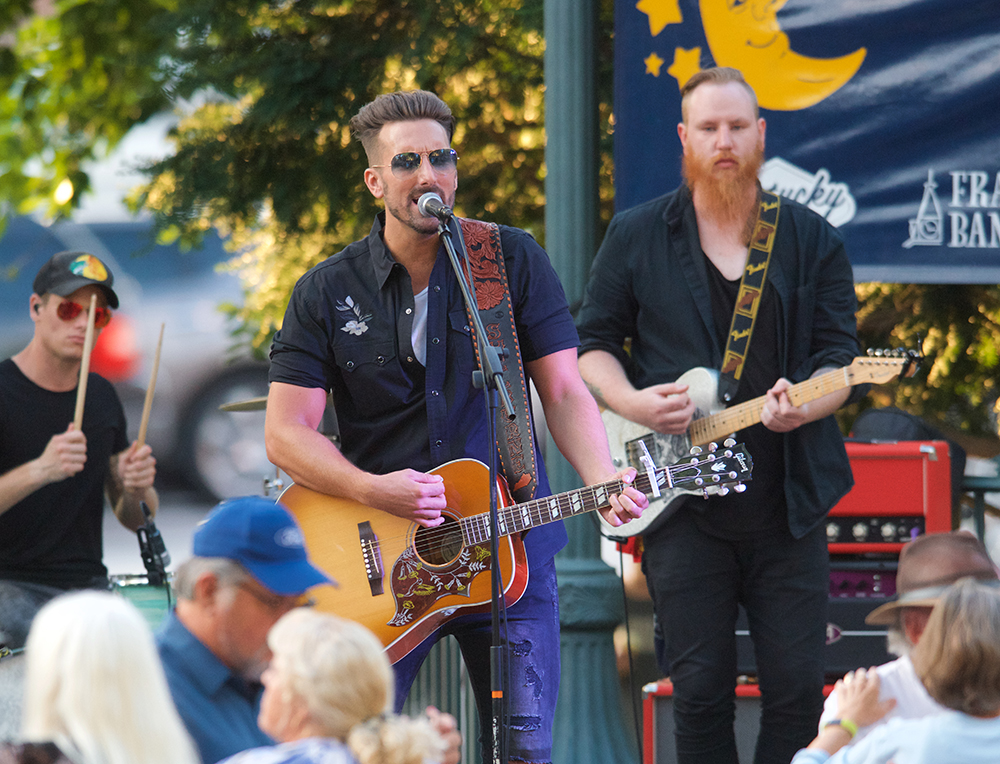 Sure, a day in the life of an up-and-coming country music performer can be filled with adoring, autograph-seeking fans, the thrill of playing music onstage, traveling and the novelty of photo shoots and making music videos.

But as J.D. Shelburne can attest, that’s not all there is to it.

The Taylorsville native has performed at more than 1,000 concerts and 300-plus festivals, several national sports events, weddings, bars and private parties. He also released his fourth CD in late July.

In the course of a day, he may take on roles of a publicist, songwriter, event planner, driver, roadie or social media guru. With a seemingly tireless work ethic, last year alone he played 230 show dates.

“I’m always on the computer hustling gigs, making calls, emailing people and looking for something new … always trying to persuade people to book me,” he says.

Performing as a solo, duo or trio acoustic act or with a full backup band, he plays a mix of original songs and cover tunes and strives to have no fewer than 65 bookings on his calendar at all times, usually within a six-hour radius of Louisville, but as far away as Las Vegas or California.

Earlier this year, he performed at the Gibson Electric Membership Corporation’s annual meeting in Ridgely, Tennessee. He’s a fixture at Kentucky Derby Festival events, and has performed at Cardinal Stadium during the Kentucky State Fair, at Freedom Hall and on the field during a Chicago White Sox pregame show, among other national sports events.

Shelburne embraces the power of social media, telling fans about his upcoming gigs and new projects and providing glimpses of what his life is like on and off the road.

Shelburne didn’t begin playing guitar until he was 19 years old, after finding a guitar in his late grandmother’s house and eventually teaching himself how to play it. He’d moved from Taylorsville in 2001 to attend Lexington Community College (now Bluegrass Community and Technical College) for his associate degree in web and graphic design, and then earned a telecommunications degree from the University of Kentucky in 2007.

When singing along to the radio with his traveling high school baseball team, and in later years playing the guitar and singing for friends at parties, he was confident in his abilities. He idolized country music greats like Alan Jackson, Garth Brooks and John Michael Montgomery, but also loves 1990s rock and his sound undoubtedly channels both.

Shelburne moved to Nashville in early 2008, and has played music professionally full time for the past three years. Serendipity struck when a friendly neighbor turned out to be successful country music songwriter Mark Nesler, who’s written hit songs for Tim McGraw, George Strait and many others. The two began to collaborate.

“J.D. is an artist that doesn’t sit around and wait for his big break; he goes out and makes it happen with a smile that would lead one to believe it already has,” Nesler says. “His music is honest and real and his fans appreciate that—he’s a true entertainer. I’ve enjoyed writing with J.D. His enthusiasm is inspiring in today’s tough music business climate. He’s definitely an artist you want to watch ’cause everybody likes to see a good guy win.”

Shelburne tries to release a new CD every two years, returning to Taylorsville for a CD launch party and free hometown concert.

“One of my most memorable performances was my 2016 hometown show,” he says. “About 5,000 people came to Taylorsville and flooded the streets. It was incredible!”

Another memorable event in 2016 was proposing to his then-girlfriend Amy Whitham on the red carpet at the Kentucky Derby Festival. They married last year.

Meanwhile, his talent and drive are paying off—he’s performed with about 50 nationally known performers, including Kellie Pickler, Montgomery Gentry, Steve Wariner and Clay Walker. On October 21, 2015, he was the No. 1 trending artist on CMT.com. His goals include playing at the Grand Ole Opry. In July, Shelburne fulfilled another goal by signing with 2911 Media, whose clients include The Oak Ridge Boys and Lee Greenwood.

Fans also keep Shelburne motivated and focused. Taylorsville resident John Day is a longtime supporter who’s known Shelburne for about seven years and says he’s seen him perform “a couple hundred” times. Day and his wife, Madge, have sponsored some of Shelburne’s gigs.

Day says he admires Shelburne for being family-oriented and down-to-earth. His favorite Shelburne song is Farmboy.

“Just the songs he sings are more about people’s lives and about living. Just basically, I enjoy his songs because he sings from the heart and he sings stuff that means something,” he says.

Wes Henderson, co-founder and chief innovation officer of Angel’s Envy bourbon and rye whiskey, is another fan and supporter.

“I say all the time he’s the hardest-working man in the music business, actually probably the hardest-working man I’ve ever met,” says Henderson, who’s known Shelburne for five or six years. “I’ve never seen anybody who’s so dedicated to his career and his fan base, not just making a difference with the music but making a difference out in the community.”

Shelburne says when he has a few days off, he enjoys putting down his guitar for a while, spending time with Amy, going shopping and to the gym, finding new places to eat and traveling.

Then it’s back on the road again.

“Touring is the way to connect with so many people from all different walks of life,” he says. “It’s all about marketing in this business and trying to collect as many fans along the way that you can.”