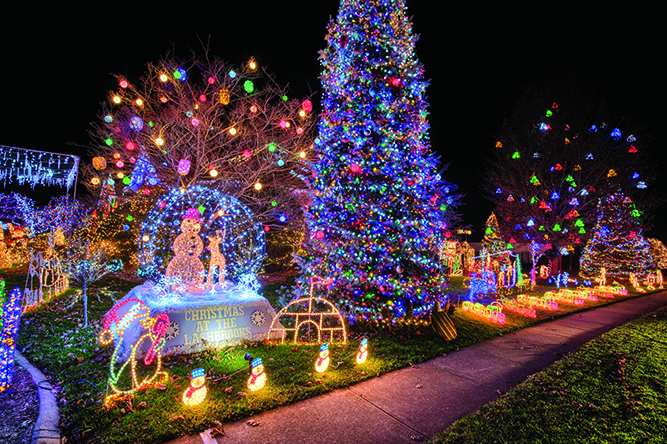 The Lashbrook family home in Owensboro has a separate meter from Kenergy Corp. to power the visual theatrics. Photo: Adam Paris/AP Imagery

Here is a holiday light display that would send Clark W. Griswold back to the exterior illumination drawing board: Over 250,000 lights; 427 figures, including snowflakes, toy soldiers, rocking horses and candles; 12 trees—all real—trimmed to their tips; 58 bedecked bushes; a herd of reindeer flying 20 feet in the air; a passel of snow people, including a custom-designed, 20-foot-tall snowman; eight different holiday vignettes, including Toy Land, Nativity, Mr. and Mrs. Claus, Train Station and more. And one separate meter from Kenergy Corp. to power the works.

The Lashbrook family home in Owensboro is so bedazzled with the spirit of the holidays that it was once featured on ABC’s The Great Christmas Light Fight. That was in 2014—and the display has only gotten bigger, and brighter.

“We try and add something new every year,” says Jessica Lashbrook Fisher of the family’s quest to outdo itself. This has included adding an enormous Santa sleigh with reindeer that flies over Toy Land, redoing holiday figures, converting to all LED lights and—the biggest project yet—creating the 20-foot snowman for the 2018 season.

Work begins in October with a goal of completing the display just after Thanksgiving. The home, owned by Jeff and Connie Lashbrook, is in Owensboro’s Stonegate community, known as one of the best neighborhoods to drive through during the holiday season due to the abundance of homeowners giddy with the
decorating bug.

The Lashbrooks don’t stop at the pulling of the light switch. The family annually hosts Christmas in Stonegate, a three-day event in December that includes Santa Claus stopping by to hand out candy canes and hot chocolate, and donations collected to support local charities.

“We get compared to the Griswolds every year,” says Lashbrook Fisher. “I think we have surpassed them now!”

One might get the idea that a toe-to-toe tinsel throwdown is what’s happening in Hopkinsville, but nothing could be further from the truth. Next-door neighbors Kevin and Lisa Brasher and Jack and Velma Crawford, consumer-members of Pennyrile Electric, are all about spreading Christmas joy—and their dueling displays simply double the holiday fun.

“We’ve been doing this for I don’t know how many years and everybody looks forward to it,” says Velma Crawford. “I just love Christmas lights and I could look at them all year long. I can’t wait to get them up every year.”

For Lisa Brasher, the idea of carrying on her late mother’s holiday traditions is the motivating force behind outdoor decorations that have scored wins in several holiday light competitions.

“My mother always decorated the house inside and out for Christmas,” she says. “Every year we would make a point to drive around town to see everyone’s lights and decorations, and I still do it to this day with my family.”

Both yards are lit up for the holidays with thousands of lights, with one key difference: The Crawfords string all white lights; the Brashers opt for multicolor.

“I encourage them to light up everything they’ve got in the front yard if they can,” says Crawford, who has shared both lights and advice with the Brashers.

Says Brasher: “She always lets me know if I have something out of place or if a bulb has gone out, plus (the Crawfords) are able to give me plenty of recommendations and help me find the source of burnt bulbs.”

The Crawfords begin decorating in October, doing a little at a time; the Brashers face it head-on, usually the Friday after Thanksgiving, with both Kevin and Lisa working non-stop the whole day to complete it.

For both sets of neighbors, the payoff is the enjoyment the displays bring to others.

Brandon Congleton can relate. He and his wife, Olivia, Salt River Electric consumer-members, began decorating their Shepherdsville home, now aglow with more than 100,000 lights during the holidays, just to see the excitement on the faces of their kids: Landon, now 7; Ezra, 6; Arabella, 3; and Lincoln, 9 months old.

“They are now getting to the age where they really enjoy helping set up the display and it’s creating a tradition for our family,” says Congleton, noting positive community response has grown right along with the show, as he calls it.

These days, the show covers 2 acres and includes about 50 hand-built props, including a waving Santa, leaping arches, both mega and mini trees, stars and a giant cross. It also references the granddaddy of do-it-yourselfer holiday light displays with a scene captured from National Lampoon’s Christmas Vacation—that of Clark lighting the house.

A sign at the end of the drive alerts visitors to the station to tune their radio to for music choreographed with the lights. They can pull up and experience the display from the warmth of their car.

New for 2018 is a singing Christmas tree and—pending approval of the local fire department—a chimney with fire shooting out of it.

The holiday display at one home in the St. Francis community of Loretto has gotten so elaborate and over-the-top that it is hard to believe it began as a hobby to show off some beloved collectibles and souvenirs from a couple’s travels.

But Ruley’s Holiday Light Show is a much-anticipated holiday extravaganza spread over 2 acres that includes more than 1 million lights and dozens of vignettes featuring some 250 characters—trains, Christmas stars, giant wreaths, the Grinch—plus charming exhibits of cookie jars and the Happy Holidays series of Barbies that date back 30 years to 1988 when it was introduced by Mattel.

“You wouldn’t believe the joy doing this has brought to my husband, Paul, and me,” says Darnell Ruley, who lost her husband on September 8, 2016, after 51 years of marriage. “Keeping Ruley’s Holiday Light Show was my promise to him.”

Work gets underway in September to have the display ready to open around Thanksgiving. It is a full-on holiday spectacular that actually feels more like a festival with its Christmas village and collectibles on display in the 4,000-square-foot viewing garage Paul Ruley built. It includes hot chocolate by the firepit; souvenirs for sale, including shot glasses, hoodies and hats; photo ops with Santa ($5); kids’ barrel rides ($3) and more.

The show operates from 5 p.m. until midnight through New Year’s Day. There is no admission; however, donations are welcome.

Tens of thousands of dazzling lights and lots of free holiday activities await visitors at two holiday destinations in northern Kentucky, through December 30. The Ark Encounter in Williamstown presents ChristmasTime, where visitors can stroll decorated grounds, view the ark exterior with its stunning new colorful computer-controlled LED lighting, and visit the zoo and gift and fair-trade store. Parking: $10. A special after 5 p.m. admission of $32.99 includes a buffet dinner and access to the inside of the ark and its three floors of exhibits.

New this year at Ark Encounter is the nation’s largest Glice rink, a synthetic ice-skating rink measuring nearly the length of a football field. Stay warm sipping hot chocolate around the fire while listening to carolers. Admission: $5 (includes skate rental).

Mega Cavern Lights Under Louisville  is, as its name suggests—mega, massive, millions: 850-plus lit characters with more than 3 million points of light enchant visitors on a 30-minute ride through 2 miles of passageways on what is the world’s only fully underground drive-through Christmas light show. New this year is the Christmas Express, an open-air tram ride through the light show available during daylight hours. Admission: $27 per standard vehicle. (See website for downloadable $5 off coupon.)

The family-friendly Southern Lights Holiday Festival, through December 31 at the Kentucky Horse Park, has 3 miles of illuminated holiday displays to enjoy from the comfort of your car, plus local crafts, model trains and mini train rides, visits with Santa, pony and camel rides, an exotic petting zoo and more at the Holiday Festival. Tickets: $17 per car Monday-Thursday; $27 per car Friday-Sunday.