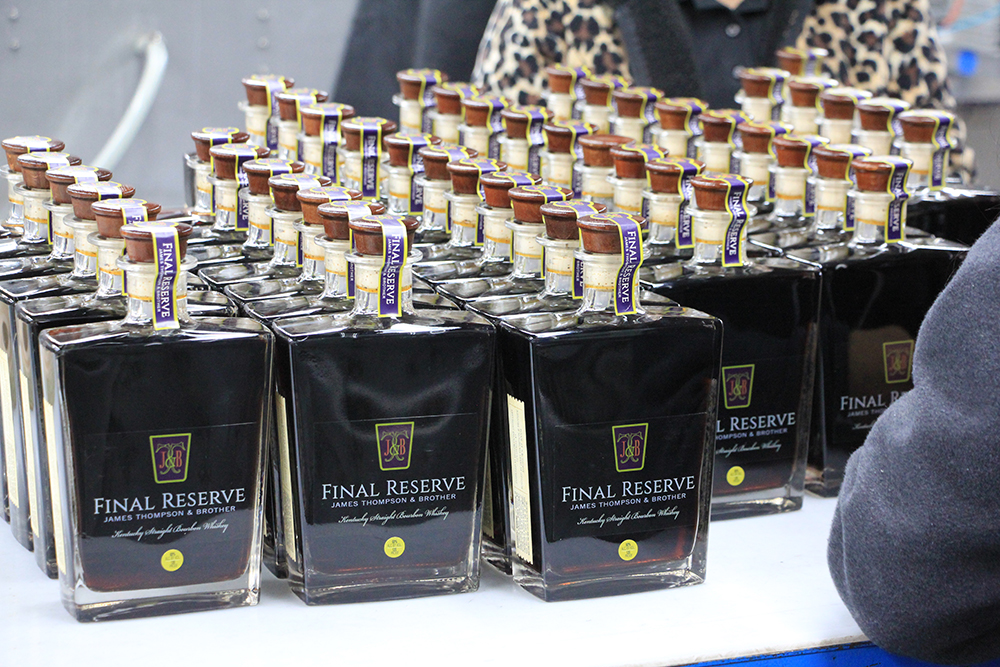 Historic Bourbon, 45 Years in the Barrel, to be sold at the Frazier History Museum

Louisville – For the very first time a bourbon that aged in the barrel for 45 years will be available to Bourbon enthusiasts for purchase and tasting! The Frazier History Museum as the official starting point of the Kentucky Bourbon Trail® and Kentucky Bourbon Trail® Welcome Center is partnering with Final Reserve and its owner, James “Buddy” Thomson, in ensuring that 100 % of the sales from the exclusive Bourbon will go to charity.

Fewer than 250 bottles of Final Reserve, James Thompson & Brother Bourbon will be available for purchase from the Frazier on Thursday, March 1, 2018. On the evening of March 1, 2018, the Frazier is hosting an event in partnership with the Bourbon Classic providing guests the rare opportunity to taste history, when Final Reserve is made available to ticket holders for tastings.

“2018 is going to be a transformative year at the Frazier, opening the Kentucky Bourbon Trail® Welcome Center and engaging with Bourbon tourists from all around the world as the starting point of the Kentucky Bourbon Trail®,” said Frazier President, Penny Peavler. “I can’t think of a better way to Kick things off, than with Buddy and this once-in-a-lifetime opportunity with Final Reserve, James Thompson & Brother Bourbon.”

Tickets will be made available to this rare and exclusive cocktail and tasting event very soon at fraziermuseum.org, with all profits benefiting various Veterans Groups and the Frazier History Museum. The first bottle has been set aside for the Congressional Medal of Honor Foundation.

Jack Rose Dining Saloon in Washington, D.C will lead tastings of the rare Final Reserve Bourbon during the event on the evening of March 1, 2018. “We’re excited to celebrate the Glenmore Distillery and Buddy Thompson’s Final Reserve with the Frazier Museum,” said Bill Thomas, owner of Jack Rose. Jack Rose Dining Saloon prides itself on being America’s premier whiskey bar featuring over 2000 bottles of rare and exceptional whiskey.

“This is one of the most fascinating project endeavors we’ve ever participated in, “said Bourbon Classic Review organizer and Bourbon Review Publisher, Seth Thompson. “To represent this during the Bourbon Classic and take part in something so special and unique, is truly the honor of a lifetime!”

A very select few Bourbon enthusiasts will not only get a chance to purchase a 750-milliliter bottle of Final Reserve, they will also receive a 100-milliliter tasting bottle, a crystal tasting glass, a piece of a barrel stave from the barrel, and 12-page booklet telling Thompson’s story, all packaged beautifully in a crafted display case.

A second release of Final Reserve, James Thompson & Brother Bourbon, in the barrel for 43 years, is scheduled to be released in June 2018 as part of the Kentucky Bourbon Affair™.

In the early 1970’s Glenmore Distilleries was anticipating several anniversary events and thought it would be nice to have some really old Bourbon for commemorative bottling, so a few barrels of the oldest recipe were set aside to rest a while longer.

Unexpected things happened and in 1991 the Guinness Company bought Glenmore and it became a small part of a very large and successful enterprise. By then the old bourbon distillery had been dismantled and its unique configuration was destroyed, marking the end of an era and the end of a product and its tradition. Still the selected barrels that had been set aside slept on for another two decades, its contents spending more time in the barrel than any bourbon available in the market.

Buddy and his buddies tasted the aging bourbon every now and then and decided 40-plus years in the barrel is long enough. It is time! All of the barrels have lost a good portion of their contents to the Angel’s Share, but a limited and exclusive amount of the bourbon has carried through in grand fashion. The strength has grown from 107 to an average of 115-barrel proof today. Final Reserve, James Thompson & Brother Bourbon was bottled at Strong Spirits in Bardstown, KY on Wednesday, December 13th, 2017.

James “Buddy” Thompson is the former President of Glenmore Distillery, a pilot, an inventor, and builder. He is 86-years-old. After earning an engineering degree at Yale in 1954 Thompson worked a few years at the family distillery, then graduated from U of L School of Law in 1962. He was active in community events, such as the United Way, the Airport Authority and the J Graham Brown Cancer Center. Thompson has a been flying since the age of 13, earning his pilot’s license when the law would allow, after the age of 16. He now not only fly’s airplanes, he also builds them, along with blimps and other air-born engineering marvels. In 1974 Thompson rejoined Glenmore when his brother was stricken with cancer. He remained in the management of the company until 1991, when the Guinness company bought Glenmore. Thompson stayed on until his retirement in 1996.  Final Reserve, James Thompson & Brother Bourbon, is a celebration of the Thompson family’s great name in Kentucky and Bourbon history.