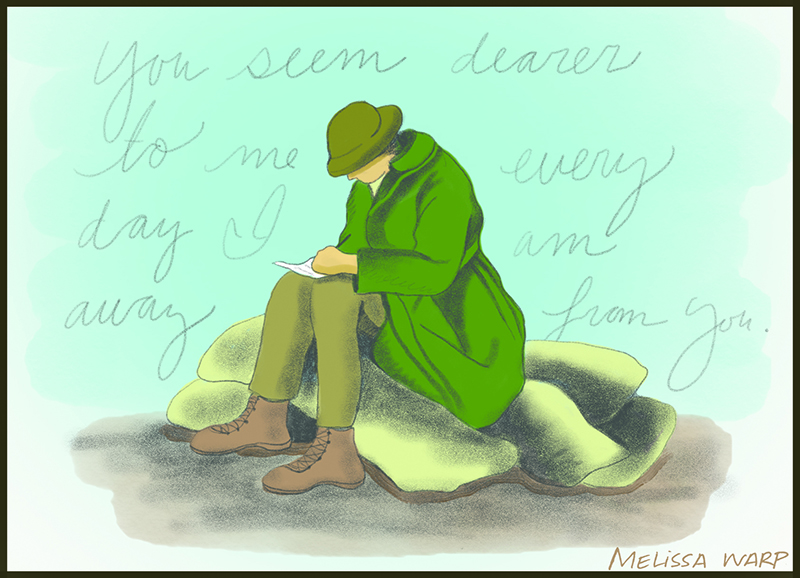 Owen Thomas Yates, a lovesick World War I soldier from Kentucky, was writing to his sweetheart, Eunice Centers, who had stolen his heart back in Allen County.

“Tom” had grown up on a farm in Barren County; Eunice on a farm just across the line in Allen County. They met while walking home from church not long before he was drafted in 1917.

Eunice saved all the letters, which eventually were passed on to the Yates children and later copied by a cousin. The originals are now keepsakes of the Yates’s grandson, Greg Dunn, an attorney in Cave City, who shared them with me.

“You seem dearer to me every day I am away from you…I wouldn’t give one smile from you for every woman in France,” Tom wrote from Le Mans on a February day 100 years ago. Although Eunice answered faithfully, her letters often did not reach him for months.

Only one of the letters she wrote—returned to her “undeliverable”—still exists. It reads, in part: “Tom, I dreamed the other night that you had come home, and were here (but woke to find it only a dream), may the time speedily come when my dream shall come true…I am as ever your little girl.  By-By-Dearest.”

Despite their love for each other, both struggled with doubt from time to time.

“Eunice, I could not blame you if you found someone you could love better than you do me, who is not in the army and can be with you, but life would be very unhappy for me if it wasn’t for the thoughts of a little blue-eyed girl down in Allen County that I love, and trust someday will be my wife…”

World War I ended in late 1918, but Tom was not discharged from the Army until September 1919, two years after he was drafted. Then he was met with heartbreaking news. He had tuberculosis, and doctors said that his best hope was to move to a drier climate. He spent two years living alone in New Mexico before he was well, but never stopped writing to Eunice, pledging his love.

They were married on December 31, 1921, and lived in Albuquerque, New Mexico, for eight more years. They had three children before moving back to Allen County, where they led a happy life together on a 220-acre farm on the Barren River.

Tom died in 1969; Eunice in 1990, but their love still speaks to us in letters saved by the “dearest little girl.”